What A Sore Dutch Loser Did [VIDEO]

It seems Dutch speed skater Sjinkie Knegt really doesn’t like to lose. We get it. Who does? But Knegt couldn’t hide his upset, making an obscene gesture – with not one but two hands – after crossing the finish line on Sunday. And he was disqualified. 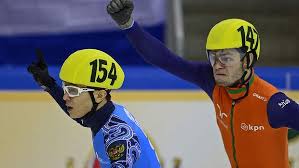 At the finish line minutes before the ‘disqualifying act’

Knegt and Victor Ahn, of Russia, competed this weekend at the ISU European Short Track Speed Skating Championships in Dresden, Germany. On Saturday, Ahn came in first at the men’s 500m final. Knegt was right behind him in second.

The post-race optics weren’t that great for Knegt. While Ahn celebrated his win by holding up one finger, Knegt was caught on camera pumping a fist in the air behind him, with what appeared to be a menacing look on his face. But photos can be deceiving. You can see his reaction above.

It could have just been a bad moment for a photo of Knegt. But there’s little question about how he felt about coming in second once again to Ahn on Sunday, when the speed skaters met in the men’s 500m relay final.

This time, Ahn raised both hands and both index fingers in a “we’re No. 1” celebration of his team’s first-place victory. Knegt, looking at Ahn, also held up both hands, but he raised a different finger.

You can see the end of the race below. Be warned, the video includes the moment that, according to the Independent, got Knegt disqualified from the championships.