The End of Angst? Prosperous Germans in No Mood for Change

The Altmuehl is Germany’s slowest-flowing river and Hans Bittl, who lives along its banks in Eichstaett, sees this as a metaphor for the low-key success of his Bavarian town. 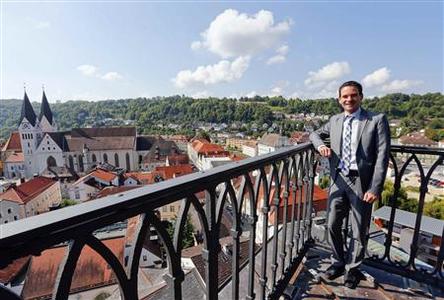 “People in Eichstaett are very cautious and don’t go along with every new fashion or idea. They bide their time and see if it works,” says Bittl, chief clerk at the town hall.

It is a trait the university town, whose unemployment rate of 1.3 percent is the lowest in Germany, shares with Chancellor Angela Merkel, who is counting on support from such pockets of prosperity to win a third term on September 22.

The outcome of the vote and the course Europe’s strongest economy steers afterwards is as important to Germany’s partners as it is to those casting ballots.

With well-paid jobs making cars for Audi in nearby Ingolstadt and light-bulbs for Osram, Eichstaett is the envy of less fortunate regions.

Yet even in places like Bremerhaven, 500 km to the northwest, where the demise of the shipbuilding and fishing industries has spawned unemployment of 15 percent, the highest rate in the country, the mood isn’t entirely bleak.

Bremerhaven is reinventing itself as a hub for offshore wind energy and luring tourists from surrounding regions to its refurbished port promenade, now dotted with hotels and museums celebrating its maritime heyday.

“We’ve emerged from the vale of tears,” says Bremerhaven Mayor Melf Grantz. “The difficult times are behind us. People are proud of their city again.”

Reality for the average German lies somewhere between the Baroque spires of Eichstaett and the container cranes that tower above the dock in Bremerhaven.

But these two centres, at opposite ends of the economic spectrum, offer clues to the national mood ahead of a federal vote that is being closely watched across Europe. Germany has been central to Europe’s response to a debt crisis that began in Greece in 2009.

Germans are less worried about their jobs than they have been in years. Over the past half decade, as the economy rebounded strongly from the global financial crisis, the number of long-term unemployed in the country has tumbled 40 percent.

In Eichstaett and Bremerhaven, people say the euro zone crisis that plunged southern Europe into deep recession, has been barely noticed.

Nearly a quarter of a century since reunification and a decade after a shake-up of the welfare state, German “angst” is fading, replaced by a more confident and contented country that is less shy about trumpeting its successes.

“Germany is no longer a country of fainthearts but of people who are realistic about their problems,” says Manfred Schmidt, a political scientist at Heidelberg University who presented an annual survey on the “Fears of the Germans” last week in Berlin.

It is because of this general mood, perhaps, that the election campaign has seemed so uneventful. In a prosperous country where consensus often trumps confrontation, there doesn’t seem to be any room for divisive, partisan policy debates. Nor is there a strong desire for change.

“German politics may be boring, but what would we rather have? The same situation as Greece? Or America with its polarised, deadlocked parties? Or perhaps Weimar?” says Josef Joffe, publisher-editor of German weekly Die Zeit. “Rarely in their democratic history have the Germans enjoyed such good fortune.”

As Merkel’s political rivals have been at pains to stress throughout the campaign, Germany has its share of problems.

There is the chancellor’s shift from nuclear to renewable energy, which officials in Bremerhaven say has been grossly mismanaged.

Nils Schnorrenberger, managing director of the Bremerhaven Economic Development Agency, says investors are being scared off and the city’s transformation jeopardised by uncertainty over what will happen to feed-in tariffs, or financial incentives, for offshore wind beyond 2017.

“Offshore wind is the big hope right now, but it can go in the opposite direction very quickly,” he says, denouncing what he calls “Banana Republic” investment conditions.

On top of the energy worries, the German economy has a range of other problems, from low incomes and a decaying infrastructure to strained municipal budgets and an aging population.

Among European Union members of the Organisation for Economic Cooperation and Development (OECD), only Hungary and Britain have a bigger percentage of low-wage workers than Germany, thanks to a decade of stagnating pay, a surge in temporary contracts and 400 euro-per-month “mini-jobs”.

The economic divide no longer runs East-West, as it did after Germany united in 1990. The survey of German fears showed for the first time in over 20 years that people living in the former communist East, where Merkel herself grew up, are no more fearful about their future than those in the West.

Crucially, there is a safety net for people like Rudi Detje, a 48-year-old native of Bremerhaven who trained as a shipbuilder in the 1980s just as the industry was collapsing. After decades in and out of jobs, he started a moving business in 2010.

He gets 382 euros per month in unemployment benefits and is allowed to keep just 100 euros of his earnings on top of that. But the state pays his rent and he can invest income that exceeds his take-home ceiling in tools and equipment.

Hans-Ulrich Wehler, the dean of German social historians, highlighted in a recent book the growing gap between rich and poor. But even he concedes that Germans are much better off than many of their western counterparts.

“There are very few long-term unemployed, we’ve had a social security net since Bismarck, pension coffers are full and a huge amount of wealth has accumulated. Everyone knows they will be taken care of. For the most part, Germans are content.”

An Allensbach survey last month on the life, hopes and worries of the “Generation Mitte” — the 35 million-strong age group between 30 and 59 — found they were “eminently satisfied” with their situation and looked to the future with optimism.

Germany is no longer the “Sick Man of Europe” as it was dubbed a decade ago. Nor is it the guilt-ridden country that once felt obliged to open its wallet to its EU partners regardless of the cost.

There is little public appetite for funding more euro zone bailouts, a YouGov survey showed last week, nor much desire for closer integration unless this would make it easier for Germany to impose budget discipline on its partners.

Yet at the same time, six in 10 Germans view the EU favourably, according to a Pew Research survey published in May. More than half say European integration has helped the country.

This may be because the crisis has barely touched them — even in Bremerhaven, which as the fourth largest container port in Europe is sensitive to the ebb and flow of global trade.

“The euro crisis has had a marginal impact,” Mayor Grantz says. “Exports to other EU countries have stagnated a bit. But we can’t say the crisis has really hit us. It’s a little dent which is not expected to last long.”

Germany’s strength during the crisis has thrust it into the role of Europe’s economic leader, giving it a dash of self-confidence that sits comfortably with a quiet revival in German patriotism, visible since it hosted the World Cup in 2006.

Germans are no longer shy about waving the flag and Merkel was applauded for wearing a necklace in black, red and gold during a debate on national TV.

In Berlin, a modern replica of the Prussian Stadtschloss palace is rising from the ground, recalling the proud era before two horrific world wars.

Germany is even urged, by its wartime enemy Britain and long-suffering neighbour Poland among others, to take on a bolder geopolitical leadership role.

Merkel’s hesitant reaction to the Syria conflict, echoing her abstention from a U.N. vote authorising force in Libya two years ago, shows Germany remains reluctant to punch its weight in foreign affairs.

“The German elite obsesses about business rather than diplomatic or military strategy,” notes Ulrike Guerot at the European Council on Foreign Relations in Berlin. “German citizens agree and see nothing wrong with living comfortably in a larger version of Switzerland.”

The post-war taboo on German hegemony can seem like a convenient excuse “to refuse involvement in the travails of the world”, says Joffe of Die Zeit.

Preferring to look inward, Germany finds reason for self-congratulation and nowhere more than in flourishing Bavarian towns like Eichstaett.

The contrast with the rest of Europe – especially southern countries like Greece and Spain, where unemployment is 20 times higher than parts of Bavaria – could not be more stark.

At the town hall, Bittl’s biggest worry is that a company might arrive with blueprints for a new factory requiring 500 workers. “That would be a problem, as we don’t have the spare workforce,” he says.

It is success like this that has turned Germany into the most arrogant and least compassionate country in Europe in the eyes of many of its partners, according to the Pew survey.

But as long as the Merkel approach — slow and steady as the Altmuehl river — continues to furnish Germans with better jobs than their neighbours, and a safety net for people like Rudi Detje in Bremerhaven, Germans will have little incentive to change.