Some Swiss cantons are demanding systematic DNA tests on asylum seekers — specifically Eritreans — who say they are coming to the country to join family members, a newspaper reported Sunday. 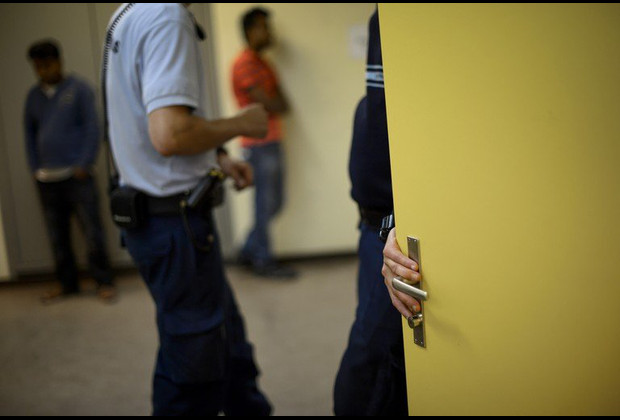 A guard speaks with a colleague next to asylum seekers on August 9, 2013 in a bunker in the Alpine village of Realp | Credit: Fabrice Coffrini/AFP/File

In June, Swiss voters in a referendum overwhelmingly approved stricter asylum criteria, notably the removal of military desertion as a valid reason for asylum.

That had been the key reason cited by Eritreans, whose country imposes unlimited and under-paid military service on all able-bodied men and women.

According to the Schweiz Am Sonntag newspaper, Eritreans also make more requests than any other nationality to bring over relatives under the family reunification programme.

“Identity papers or birth certificates must be considered as suspect” when presented by people seeking residence under the family reunification programme, said Iris Rivas, head of migration services in the canton of Bern.

She told the newspaper that in many home countries of asylum seekers, official papers are easy to forge and their embassies in Switzerland verify only whether the surnames given match those of the petitioners.

The call for DNA testing is also supported by the canton of Lucerne’s migration chief Alexander Lieb.

“Identity control in the case of family reunification is too lax,” he said.

Swiss law currently allows case-by-case requests for DNA tests when there is serious doubt that a claimant belongs to the same family.

Switzerland is among the European countries that welcomes the most asylum seekers in proportion to its population, and numbers have soared in recent years, in part due to the Arab Spring uprisings.

The country has faced a barrage of criticism over its treatment of asylum seekers, including segregation and poor living conditions.

A fierce row broke out in early August amid reports that a small town was allowed to deny residents of a new asylum centre access to public facilities such as the swimming pool.

Authorities maintain that this was a misunderstanding.

Currently fewer than 20 percent of petitioners are granted asylum in Switzerland in a process that can take several years.