Six Migrants Coming From Africa Drown in Sea Off Sicily 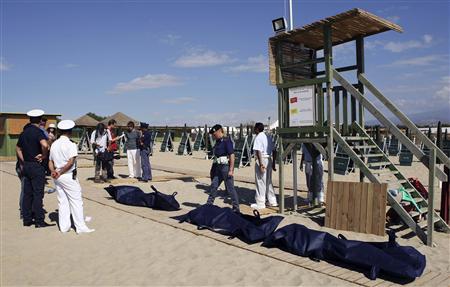 Italian police stand guard next to bodies of migrants who drowned after a shipwreck, at La Playa beach in Catania on Sicily island August 10, 2013.
Credit: REUTERS/Antonio Parrinello

Six migrants drowned off the Italian island of Sicily on Saturday after attempting a dangerous passage from Africa in a fishing boat, according to the Italian coastguard.

The 18-metre-long boat carrying some 120 migrants ran aground at dawn some 40 meters (132 feet) from a beach near the city of Catania, its coastguard captain Roberto D’Arrigo said.

While most of the passengers reached the shore, the six who drowned were apparently unable to swim.

The 120 migrants were mainly from Syria and Egypt, D’Arrigo told Sky Italia television, with an adolescent boy among the victims, who were all under age 30. Egypt has suffered prolonged political and economic turmoil. Syria is shattered by civil war.

D’Arrigo said he did not believe there were other victims in what he described as an “absolutely anomalous event”.

African migrants normally reach Sicily’s more southern coast or the island of Lampedusa to the south, only 110 km (70 miles) from Tunisia in North Africa. D’Arrigo said a migrant boat had never previously put into Catania – halfway up Sicily’s eastern coast, leading him to believe the boat had lost its way.

Thousands of immigrants seek the southern shores of Italy every summer, when Mediterranean waters in the Strait of Sicily calm sufficiently for small boats to make the crossing, usually fromLibya or Tunisia.

They come looking for work in the European Union and many do not remain in Italy. Those who do, or who are taken into Italian custody, can be sent home.

Another boat carrying around 90 migrants arrived safely on Sicily’s southeast shore on Saturday, near the town of Syracuse.

Last month Pope Francis, in his first official trip outside Rome, celebrated mass on Lampedusa to commemorate the thousands of migrants who have died at sea.

According to United Nations refugee agency UNHCR, almost 8,000 migrants and asylum seekers landed on the coasts of southern Italy in the first half of the year. The vast majority were from North Africa, mainly Libya, which has been in turmoil since the overthrow of Muammar Gaddafi in 2011.

The UNHCR said 40 people were known to have died crossing from Tunisia to Italy in the first half of the year, though it is thought that many deaths are never reported.

Last month the Italian coastguard coordinated the rescue of 22 migrants after their boat sank off the coast of Libya. But 31 others were feared drowned following the incident, including a baby and four pregnant women, according to the UNHCR.