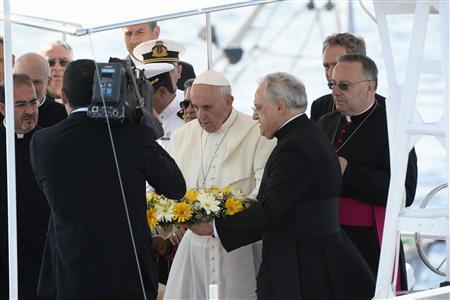 Pope Francis prepares to throw flowers on the sea as he stands onboard a boat at Lampedusa Island, southern Italy. REUTERS-Andreas Solaro-Pool

Pope Francis celebrated mass on the tiny Sicilian island of Lampedusa on Monday to commemorate thousands of migrants who have died crossing the sea from North Africa, underlining his drive to put the poor at the heart of his papacy.

The choice of Lampedusa for his first official trip outside Rome was highly symbolic for the pontiff, who said news reports of the deaths of desperate people trying to reach a better life that had been like “a thorn in the heart”.

Thousands of islanders waving caps and banners in the Vatican’s yellow colors welcomed Francis at the fishing port where he arrived aboard a coastguard vessel accompanied by a flotilla of fishing boats and cast a wreath into the water.

He spoke to young African migrants before celebrating mass in a sports field that served as a reception center for tens of thousands of mainly Muslim migrants who fled Arab Spring unrest in North Africa in 2011, greatly increasing an exodus that has gone on for years.

His trip came at the start of the summer months when the island, one of the main points of entry into the European Union and just 113 km (70 miles) from Tunisia, sees a steady flow of rickety and unsafe boats arriving on its shores.

He saluted the migrants, many of whom are preparing to fast during Ramadan, and thanked the people of Lampedusa for taking them in and setting an example of solidarity to a selfish society sliding into “the globalization of indifference”.

“We have become used to other people’s suffering, it doesn’t concern us, it doesn’t interest us, it’s none of our business!” he said during his homily from an altar built from an old fishing boat painted in Italy’s red, green and white colors.

With the Church struggling to get to grips with financial shenanigans at the Vatican bank and memories of the pedophile priests scandal still fresh, the visit to Lampedusa was an opportunity to turn away from internal upheaval.

He had harsh words for people smugglers who he said profited from the misery of others as well and asked pardon for “those, whose decisions at a global level have created the conditions which have led us to this drama”.

During the mass he used a wooden chalice carved from the wood of a migrant vessel by a local carpenter.

At the height of migrant influx in 2011, when over 62,000 arrived in Italy, dozens of boats carrying hundreds and even thousands of people were arriving in Lampedusa every day and although the numbers have declined, arrivals have continued.

Shortly before the pope arrived, a boat carrying 165 migrants from Mali pulled into port, while on Sunday, 120 people, including four pregnant women, were rescued at sea after the motors in their boat broke down 7 miles off the coast.

According to U.N. figures, almost 8,000 migrants and asylum seekers landed on the coasts of southern Italy in the first half of the year, the vast majority of them from North Africa, mainly Libya, which has been in turmoil since the overthrow of Muammar Gaddafi in 2011.

So far, the United Nations said 40 people were known to have died crossing from Tunisia to Italy this year, down from 2012 when almost 500 were reported dead or missing. The improvement follows better coordination between Italy and nearby Malta.

The islanders have sometimes seen their home transformed into a refugee center, with improvised campsites dotting the hills above the port but they have largely welcomed the migrants and there have been few tensions or problems.

Normally a sleepy island that lives mainly from tourism and fishing, Lampedusa’s normal population of some 5,000 has been outnumbered on several occasions by migrants waiting at the portside or in the main reception center to be transferred to Sicily and mainland Italy.

Reminders of the crisis are everywhere on the island, notably in the portside scrapyard of old fishing boats, normally chosen by migrant smugglers in the knowledge that they would have only one voyage to make.