Pope Francis on Sunday spoke out about the plight of refugees and the traffickers who want to “enslave” them before visiting a parish near Rome’s main railway station that cares for immigrants and homeless people. 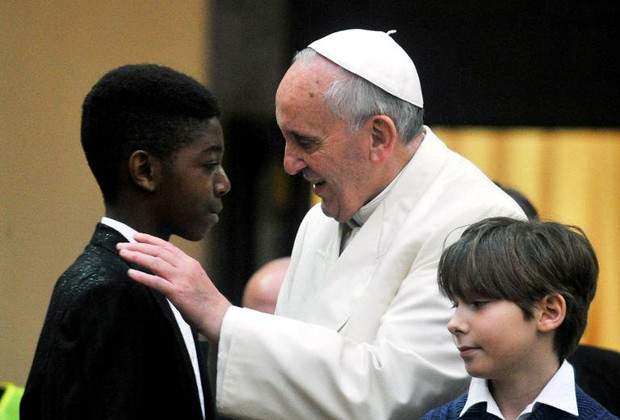 Pope Francis welcomes a child upon his arrival at the Rome parish of the Sacro Cuore di Gesu (Jesus’ holy heart parish) for a pastoral visit on January 19, 2014 | Credit: Tiziana Fabi/AFP

“Let us think of the many migrants, the many refugees and their suffering,” Francis, the son of Italian immigrants to Argentina, said on a day the Catholic Church marks as the World Day of Migrants and Refugees.

“Their lives are often without jobs and without documents and with a lot of pain,” the 77-year-old said in his weekly address to a crowd of thousands of pilgrims from a window overlooking St Peter’s Square.

Francis has shown particular attention to the issue and in his first trip as pope in July 2013 he visited the Italian island of Lampedusa, where tens of thousands of asylum-seekers arrive from North Africa every year.

He has also repeatedly spoken out against human trafficking and on Sunday he railed against “the merchants of human meat who want to enslave migrants”.

Addressing immigrants, the Argentine pope said: “Do not lose hope in a better world! I hope you will live in peace in the countries that welcome you and retain the values from the cultures that you came from.”

He also said that the Church should not be “a besieged citadel” but should be “open and welcoming”.

The pope later on Sunday visited the Sacred Heart of Jesus parish near Termini station where he met a group of homeless people and dozens of the migrants who attend courses organised by the church.