The elite field for this year’s London marathon was unveiled on Saturday in the Kenyan Rift Valley town of Iten where most of the top contenders have converged to take advantage of the high altitude ahead of the big race in April. 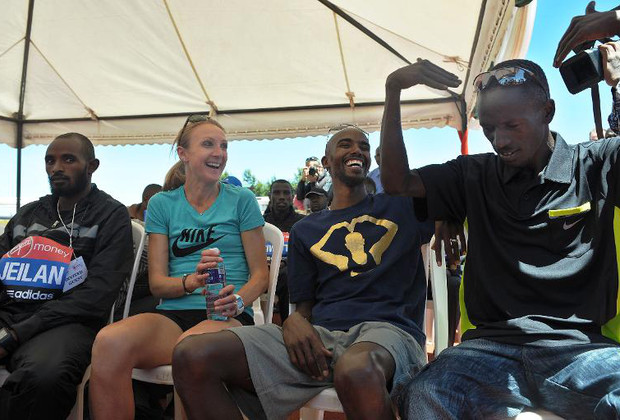 Farah, who is set to making his first serious marathon debut in London having run in last year’s edition but admitted beforehand he would not be running the full distance, arrived in Kenya in January to join a part of the British endurance team already in Kenya and preparing for the upcoming Commonwealth Games in Glasgow.

However fellow British distance star, Paula Radcliffe, who is also in Kenya, predicted it will not be easy for Farah to make the jump from the track to the roads of the British capital and keep up with the Kenyan stars.

“It is going to be very emotional for Mo to go and do it, especially because he will going into his own debut. He’s very much going into unknown terrority but at the same time with a lot of expectations on him because of his amazing results on the track,” Radcliffe, who holds the women’s marathon world record, told AFP.

“It is a big step and I think he’s well equipped to handle it well and he’s excited and looking forward to it,” said Radcliffe, whose own career seems to be at a crossroads after a long injury lay-off.

“But people need also to remember that it is his debut and it may take him a little time to learn the distance.”

Kenya’s Geoffrey Mutai, who is making his second appearence in London after dropping out at the half way stage last year with an injury, concurred with Radcliffe.

“This will be a very competitive race. The marathon is a different ball game from the track — it’s a long way. You can prepare yourself very well, but if you don’t have the patience it can be extremely hard to make the breakthough,” said Mutai, who set the quickest marathon time of 2:03.02 in Boston in 2011, not recognised as an official world record because of the nature of the course.

Ethiopia’s former World 10,000m champion, Ibrahim Jeilan has also been training in Iten for the last month for his debut appearance in London marathon, hoping he will be able to translate his track pedigree to the roads. But he accepts there is a big difference between the two.

“Track training is very short and fast and training for the marathon is long and needs patience,” he said, adding that he hoped to break 2:06 in London if his training goes well.

Jeilan clocked a modest 64:37 in his first ever half marathon in Lisbon last October.

Jeilan, the last man to beat Farah on the track, also ruled out the possibility of the two of them fighting out the finish again in London.

“This is a marathon. You cannot wait for each other at the final bell to kick each other. This is a race you have to go all the way by yourself. We will see what will happen,” added the 24-year-old Jeilan.