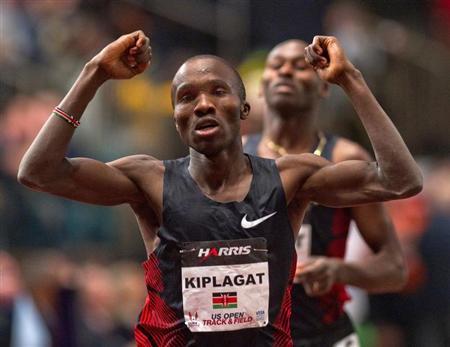 Silas Kiplagat of Kenya reacts at the finish line after beating Bernard Lagat (rear) of the U.S. in the men’s 1 mile run at the US Open Track and Field meet at Madison Square Garden in New York, January 28, 2012.
Credit: Reuters/Ray Stubblebine

Kenya have withdrawn world silver medalist Silas Kiplagat and three other runners from this week’s Diamond League meeting in London, fearing they could be burned out before next month’s athletics world championships in Moscow.

“London is too close to Moscow and this may burn out our athletes,” Athletics Kenya (AK) president Isaiah Kiplagat told reporters on Tuesday.

“We shall not allow the athletes we selected for the world championships to run in any other (Diamond) League races until after Moscow.

“Our athletes should learn from Russian athletes who have not featured in the (Diamond) League meetings because they want to perform well at home.”

As well as Silas Kiplagat, who is the world silver medalist in 1,500m, Nixon Chepseba, Conseslus Kipruto and Olympic steeplechase bronze medalist Abel Mutai have been withdrawn from the London meeting on Friday and Saturday.

Kenyan athletes and AK were criticized last year when Kenya underperformed at the London Olympics, with many observers saying the runners looked jaded after racing in events ahead of the Games.

Silas Kiplagat won the 1,500m race at the Kenyan trials ahead of world champion Asbel Kiprop, while Chepseba was third. Teenager Kipruto won the 3,000m steeplechase ahead of Mutai.

Kenya have selected 42 athletes for the world championships which run from August 10-18.