A German court on Tuesday sentenced a Rwandan Hutu to 14 years in jail for his role in the genocide of Tutsis in Rwanda in 1994, ending Germany’s first trial related to the mass killings in central Africa. 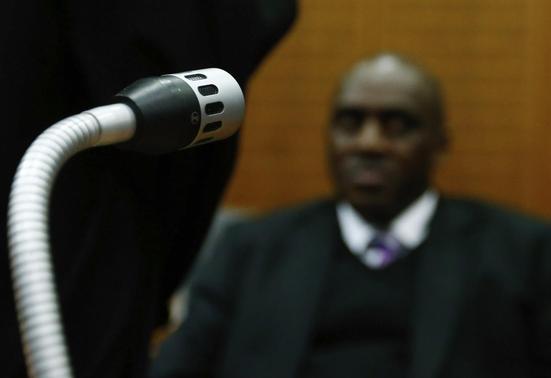 Rwandan defendant Onesphore R. waits for the start of his trial in a courtroom in Frankfurt February 18, 2014. |CREDIT: REUTERS/RALPH ORLOWSKI

Onesphore Rwabukombe, who has lived in Germany since 2002, was a mayor in north Rwanda at the time of the genocide in which an estimated 800,000 people were killed in 100 days.

The presiding judge at the court in Frankfurt said in his verdict that while Rwabukombe did not kill anyone, he oversaw and assisted in the murder of at least 450 men, women and children at the Kiziguro church compound in east Rwanda.

Judge Thomas Sagebiel, who had heard more than 100 witnesses over three years of hearings, described scenes of slaughter committed with machetes, sticks and hatchets, which Rwabukombe helped to direct, even driving militia men to the site of the ongoing massacre in his own pick-up truck.

“Germany is no safe haven for perpetrators in international law, that is the message that goes out from today’s verdict,” said lead prosecutor Christian Ritscher.

Ritscher and his team had argued that Rwabukombe was responsible for the deaths of more than 3,730 Rwandans and called for a life sentence.

Rwabukombe, 56, denied all charges. His lawyers, who had sought an acquittal, said they would lodge an appeal.

Other countries have also tried Rwanda genocide suspects but Rwanda wants suspects abroad to be extradited to face justice at home and has lobbied for them to be sent back.

Many nations are still hesitant. Five people in Britain are awaiting extradition hearings due to start next week.

“GO DO YOUR WORK”

After the 1994 genocide, Rwanda used traditional community courts to try those accused of crimes and to assist in reconciliation. Nearly 2 million cases were heard in 10 years before the courts finished their work in 2012.

The U.N.-backed International Criminal Tribunal for Rwanda, based in the Tanzanian town of Arusha, has completed 75 cases in which 63 people were convicted or pleaded guilty.

Frankfurt defendant Rwabukombe was the mayor of northern Rwandan Muvumba community, which had been displaced to three Hutu refugee camps near the church compound.

He and another top civil servant, who had been given a life sentence by the Rwanda Tribunal in 2011, directed local forces to commit the massacre at the Kiziguro parish, the German judge said, adding the evidence however did not suffice to name Rwabukombe an accomplice in the murders.

Most of the victims of the massacre, Tutsi and moderate Hutus, had in the run-up to the mass killing sought refuge on the walled church premises. Other Tutsis had been rounded up at the compound by Hutu militia and soldiers.

The judge drew on accounts of witness who heard Rwabukombe tell his henchmen upon entering the compound to “go help out” and “go do your work”.

He was also seen as watching over the disposal of the dead bodies in a nearby well shaft, as part of which young Tutsi men were forced to help before also being killed.