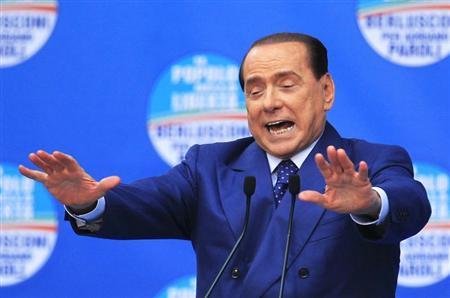 People of Freedom party member Silvio Berlusconi gestures as he makes an address on stage in Brescia May 11, 2013. Credit: Reuters/Alessandro Garofalo

An encyclopaedia of Italian political slang has shone a light on a colourful and Byzantine world where lawmakers and journalists speak a language you won’t find in any ordinary dictionary.

The confusing nature of Italian politics has come to the fore in recent months, with an electoral result in which the leading party won the lower house but not the senate, a resulting two-month stalemate, and the final formation of a government led by none of the candidates who campaigned.

Here is a selection of the words that best sum it all up in the encyclopaedia ‘Il Crollo’ (‘The Downfall’), compiled by journalist Lorenzo Pregliasco:

The term for a “mysterious sexual ritual” supposedly enjoyed by guests at Silvio Berlusconi’s parties. It originated from testimony from the Moroccan nightclub dancer Karima El Mahroug, or ‘Ruby the Heartstealer’, in October 2010.

The phrase became synonymous with Italy’s then prime minister, and its viral spread through international media in 2011 accompanied the collapse of both his reputation and the financial markets’ trust in Italy’s ability to repay its debt.

Originally meaning caste, the word now refers to a clique of politicians keeping a grip on privilege and power. It was a favorite term of the 5-Star Movement that stormed to 25 percent of the vote in its first national election, promising to kick the ‘casta’ out of parliament.

From the catch phrase of regionalist party the Northern League – “The League has it hard”, a not so subtle allusion to an erect penis. It refers to macho posturing and “the assumption of aggressive or decisive political attitudes, at the cost of appearing crude or coarse”.

Paying lawmakers to switch sides in parliament to shore up or undermine a government. In a current ‘compravendita’ investigation, former Senator Sergio De Gregorio told officials he accepted 3 million euros ($3.86 million) from Berlusconi to change sides and topple the centre-left government in 2006.

Workers who voluntarily took early retirement but found themselves without a stipend because of a 2011 pension reform that raised the retirement age. A combustible political issue, particularly following several suicides of people affected.

The supporters of former comic and 5-Star founder Beppe Grillo, meaning ‘little Grillos’ or ‘little crickets’. In Italy, the insects are associated with speaking uncomfortable truths.

The word for a deal done under the table, particularly between supposedly rival political groups. It leapt in usage in April 2013 as opposing centre-left and centre-right groups in parliament zoned in on an agreement that would allow them to share power.

Term for 14 young women housed at Berlusconi’s expense at number 65 via Olgettina in Milan. They were frequent guests at parties at the home of the former prime minister.

A ‘pianist’ uses the vote of an absent adjacent parliamentarian as well as his own, by stretching out his arm to press the voting button on his colleague’s desk.

Taken from the English. In Italian financial circles, it is most often used to refer to the price difference between Italian 10-year bonds and benchmark German bunds. “Lo spread” spread beyond those circles to become a ubiquitous buzzword in 2011, referring broadly to Italy’s precarious financial position.

“Enough with this talk of the spread,” Berlusconi declared in February 2013. “We lived happily for years without worrying about it. It’s an invention of two years ago.”