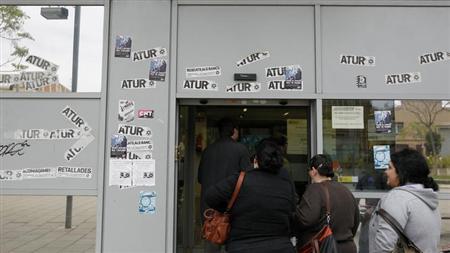 People line up at an employment office in Badalona, near Barcelona, April 25, 2013.
Credit: Reuters/Albert Gea

The number of people out of a job in theeuro zone has fallen for the first time in more than two years, the latest sign the bloc may make a muted recovery from recession later this year.

Falling spending in June by shoppers in Germany, France and Spain, however, will dampen any early celebrations, but low annual inflation – stable at 1.6 percent in July – means the European Central Bank is able to act if the recovery falters.

In June, 24,000 fewer Europeans in the single currency area were jobless compared with May, EU statistics agency Eurostat said on Wednesday, the first decrease since April 2011.

Predictions of a rebound have so far proved illusory as Europe tries to overcome more than three years of crisis.

Indeed, the fall in euro zone joblessness was not enough to bring down the overall unemployment reading for the bloc, which remained at a record 12.1 percent for the fourth straight month.

More than 19 million people were unemployed in June.

Retail sales in Germany, Europe’s largest economy, fell by the most this year in June, slipping 1.5 percent, while French spending fell back in the month from May and missing expectations of a rise.

In Spain, retail sales fell for the thirty-sixth month running in June and only 39 fewer people were out of a job in the month compared to May in a country where the unemployment rate is second only to Greece in the wider European Union at 26.3 percent.

“It’s no secret that domestic demand remains very weak because spending is massively impaired by unemployment and austerity,” said Gilles Moec, an economist at Deutsche Bank.

Talk of a recovery has intensified, however, after euro zone business and economic sentiment indices rose to a 15-month high in July, helped by the European Central Bank’s pledge to stand behind the euro zone, as well as a recovering U.S. economy and a lessening of harsh austerity policies.

These signs of improvement mean the European Central Bank is likely to hold off from cutting interest rates when it meets on Thursday. ‮In a Reuters poll of 70 economists, conducted before the PMI survey came out last week, all but one expected the ECB to hold policy rates steady at Thursday’s meeting.

“Recession is probably over” was the headline of a Commerzbank research note last week, and Europe is beginning to grab the attention of investors who are looking to the euro zone and Britain to take over a stock market boom in the United States and Japan after double-digit gains there this year.

Companies ranging from home-appliance manufacturers Whirlpool Corp and Electrolux AB to Ford Motor Co. have told investors that their operations are performing better and a turnaround may be on the horizon.

But companies including supermarket chain Carrefour continue to cut costs and jobs as demand remains weak.

The European Commission, the EU’s executive, played down any suggestion that European policymakers would be satisfied by the improvement.