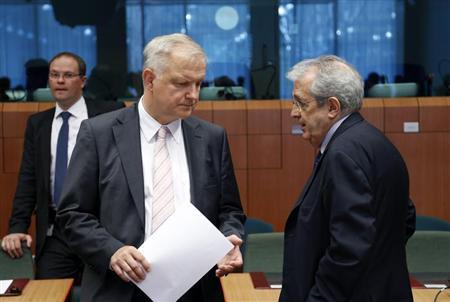 Greece secured a lifeline from the euro zone and the IMF on Monday but was told it must keep its promises on cutting public sector jobs and selling state assets to get all the cash.

The 6.8 billion euro ($8.7 billion) deal, which spares Greece defaulting on debt in August, will see Athens drip fed support under close watch from the euro zone and the International Monetary Fund to ensure implementation of unpopular reforms.

The tough approach underlines waning patience with Greece, which has been kept afloat on emergency funding since May 2010 but has failed to make all the difficult reforms demanded of it after a decade of living beyond its means.

“It’s time to step up the momentum of reform in Greece,” Olli Rehn, the European commissioner in charge of economic affairs, told a news conference.

Reforming Greece remains central to the euro zone’s ability to put its crisis behind it, while the bloc needs Athens to cooperate to keep the IMF from pulling out of the program.

But it is only one of the problems facing the euro zone.

Political upheaval in Portugal last week raised questions over Lisbon’s ability to complete reforms needed to return to borrowing on the markets. Rehn also cautioned that the “clock was ticking” on Slovenia, where banks are saddled with billions of euros of bad loans.

Keeping Greece in a hand-to-mouth existence, meanwhile, could threaten its bid to emerge from economic depression, with nearly two out of three young Greeks without work.

Thousands of municipal workers and school teachers took to the streets of Athens earlier on Monday in a noisy protest against public sector cuts.

Greece is expected to return to growth in 2014, albeit an anemic 0.6 percent. Athens was counting on the money, one of the last big disbursements under its 240 billion euro bailout, to be paid out in one go.

But it will now have to wait for much of the cash injection.

Even the first payment of 2.5 billion euros requires that Athens show creditors by July 19 that it is serious about cutting thousands of public sector jobs by the end of the year, as well as modernizing the tax code.

Rehn denied that trickling out the funds would derail the recovery, but the economic situation is fragile.

Greece failed in June to attract any buyer for natural gas company DEPA as its plans to sell state assets fell well short of what its backers had demanded. Exports, investment and tourism have yet to show signs of a recovery.

Under the terms of the Monday’s agreement, euro zone finance ministers and IMF head Christine Lagarde agreed to make staggered payments of aid to Greece starting with the 2.5 billion euro installment that comes from euro zone countries.

The agreement foresees a further payment from euro zone countries of 500 million euros in October.

Central banks in the Eurosystem will contribute 1.5 billion euros in July and 500 million euros in October, by dishing out the profits that they and the European Central Bank made from the sale of Greek debt that they had held.

The IMF will give 1.8 billion euros in August.

Keeping the Washington-based lender on side will be one of the most delicate balancing acts facing the euro zone this year, as the IMF grows increasingly uncomfortable with the problems in Greece.

“If the IMF is not needed by the euro area … it’s the best news of the day,” Lagarde told reporters after the meeting.

Portuguese Prime Minister Pedro Passos Coelho patched over a political crisis at the weekend, caused by concerns about the government’s austerity drive, by giving his junior coalition partner more say on economic policy.

“It is crucial … that there is political stability to push forward programs and this goes for Portugal,” said Jeroen Dijsselbloem, the Dutch Finance Minister who chaired the meeting of euro zone ministers.

“We hope that political stability will continue.”