Berlusconi Ordered To Do Community Service for Tax Conviction

A court on Tuesday ordered former Prime Minister Silvio Berlusconi to serve a tax fraud sentence by doing community service with the elderly, in a ruling that restricts his movements but not his political activity. 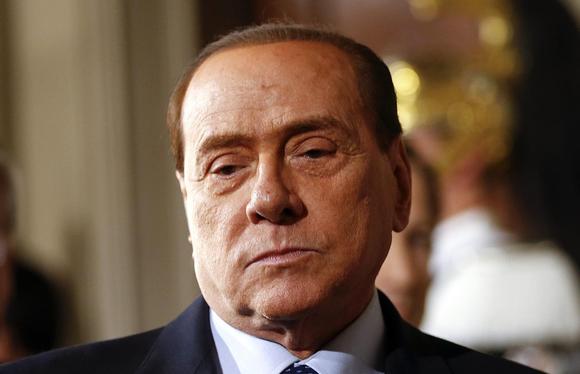 Leader of Forza Italia party Silvio Berlusconi arrives to talk to reporters at the end of the consultations with Italian President Giorgio Napolitano at the Quirinale Palace in Rome February 15, 2014. | CREDIT: REUTERS/TONY GENTILE

The court ruled that Berlusconi, one of Italy’s richest men, must spend four hours a week in a Catholic old people’s home on the outskirts of Milan for a year. The home’s director said the media tycoon would keep residents company and take them to Mass.

The four-time prime minister, 77, will not be allowed to travel outside Lombardy, the region around Milan where he has his main residence, except for restricted trips to Rome.

However, Berlusconi’s allies said he would still be able to campaign for next month’s European Parliament election and play a political role. The ruling does not mention any restrictions on holding political rallies or giving interviews.

Following a definitive tax fraud conviction last year, Berlusconi was stripped of his seat in the Italian Senate and barred from holding public office for two years.

But he remains the most influential politician on Italy’s center-right as leader of the Forza Italia party.

A court statement said the trips to Rome could take place weekly, from Tuesday to Thursday, with Berlusconi ordered to be back at his Lombardy residence by 11 p.m (5.00 p.m. ET) each Thursday. Berlusconi is expected to begin his community service duty by the end of the month.

His lawyers Franco Coppi and Niccolo Ghedini said in a statement that the ruling “appears balanced and satisfactory even with regards to the needs of political activity”, and political allies said they were pleased with the decision.

“Berlusconi will take part in the electoral campaign,” said his aide, Giovanni Toti. Another ally, Raffaele Fitto, said the ruling was nonetheless “a deep wound for Italian democracy”.

Milan prosecutors did not press for house arrest and agreed with Berlusconi’s lawyers to ask for community service.

The court said the twice-divorced TV magnate will work at the Sacred Family Foundation in suburban Cesano Boscone. Founded in 1896, the Church-run center cares for about 2,000 old and disabled people on a site complete with a chapel and a theatre.

Its director, Paolo Pigni, said the plan had yet to be formalized but the foundation had offered to give Berlusconi work supporting staff in its facility for the elderly: “It would mean accompanying people to mass, entertaining them, going for a stroll together, just being near them,” he told Reuters.

Berlusconi, who is also appealing a conviction for paying for sex with an underage prostitute, has dominated Italian politics since the mid-1990s, repeatedly escaping punishment in criminal cases he said were engineered by his political foes.

That run came to an end in August, when he was finally convicted of masterminding a complex system of tax fraud at his Mediaset television network. His four-year sentence was commuted to a year under a law aimed at reducing prison overcrowding.

Berlusconi continues to protest his innocence and says he has been persecuted by leftist magistrates.

By doing community service, the former cruise ship crooner joins the likes of singers Boy George, who was ordered to sweep clean the streets of New York after cocaine was found at his apartment, and George Michael, who did some work at a London homeless shelter after driving under the influence of drugs.

“I am very happy with this sentence because I certainly do not understand why he should have any kind of privileged position. If this is the punishment, even if it seems very small to me, then this is correct,” said Rome resident Barbara Francavilla.

The center-right has suffered an internal split and lost support since Berlusconi almost won last year’s national election, but Forza Italia is still Italy’s second or third largest party with about 20 percent of the vote, according to varying opinion polls.