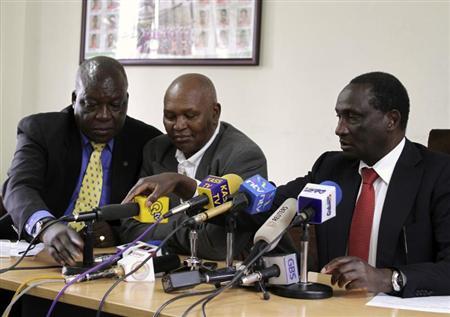 Kipchoge Keino at a past press briefing

Some of Kenya’s top runners will skip next month’s Moscow world championships on the orders of their agents, who want athletes to prioritise events that pay more, according to former Olympic champion Kipchoge Keino.

A host of Kenyan runners will miss the championships due to injury while some who are fully fit have declined the invitation to compete in Moscow.

“I think some of it comes from the agent,” Keino told Reuters in Eldoret, a large town in Kenya’s Rift Valley where many of the country’s champion runners are based.

“Agents say: ‘Don’t go to this, we have an event here, or a grand prix there…and you can earn more money’.”

The Aug. 10-18 championships will pay $60,000 to the winners of individual events, with $100,000 for world records, but similar fees are available just for turning up at some of the prestigious city marathons.

“If you go and run in a (well-paid) event and you win, who knows about that event in 10 years? But if you become a world champion, you have a name to last. Name is money, the name is your future life.”

Athletics Kenya (AK) has repeatedly threatened to sanction agents who enrol athletes in races that either clash with international championships or tire out the athletes ahead of them.

Keino said agents’ desire for their athletes to devote their energy to lucrative events might have contributed to Kenya’s poor showing at last year’s London Olympics, where the east African country won only two gold medals.

Kenya won 17 medals at the 2011 Daegu world championships but few expect such success in Moscow as the team have been weakened by injuries, with athletes such as 800 metres Olympic and world champion David Rudisha sidelined.

Keino questioned the absence and motivation of others.

“I’m yet to figure out why they are not going for the world championships,” he said, adding that it should be a matter of pride to represent Kenya at international events.

Keino, who became a successful businessman after his track career was over, said skipping international events to focus on higher-paying but less prestigious races around the world was a false economy for the athletes.

“If you go and run in a (well-paid) event and you win, who knows about that event in 10 years?” Keino said. “But if you become a world champion, you have a name to last. Name is money, the name is your future life.”